skip to main | skip to sidebar

And so it begins: San Antonio

Hello everyone! As many of you know, I have set off from Milwaukee on a 3-month motorcycle trip with my friend Tom. The idea of this trip is to ride from Milwaukee, through Mexico and Central America, and see most of the countries in South America. The ultimate goal (time and circumstances willing) is to make it to the southern tip of South America at Tierra del Fuego, and then get myself on a plane and get back to Chicago to start my new job. But that is a ways away. I received a lot of positive comments about the series of emails I sent out during the big motorcyce trip I took around India, so I have planned on doing the same e-mail updates for this trip. So to those of you who were on that list: Welcome back. For those of you new to the realm of 'Nate traveling around the world and doing stupid things', hopefully you will enjoy. And if at any time you no longer want to be on this list, let me know and I will get you off. I don't want to become spam or junk mailed. And also, since Tom and I have a lot of common friends, some of you may get more emails than you want, so I won't be hurt if you want off my list.

This trip has required a monstrous amount of planning and preparation (and $). Countless hours were spent this summer sweating and cursing while working on the bikes in my parents garage. (And my parents deserve a great deal of thanks for quietly allowing us to oil stain their floor, chew up the blacktop on their driveway, and bang up the fridge. I think they made their recent decision to move to Arizona just so they could have a pristine garage again). Most of my summer was spent studying for the bar during the day and cranking a wrench at night. Its been fun, educational, and stressful for both Tom and me. But preparation details are not real interesting...

July 30 was D-Day. The bikes were packed, tanks filled, and good byes said. We headed south from Milwaukee, praying that one of these bikes would not keel over before the state line and put a quick end to the trip. But true to their reputation, the bikes ran strong. The only hiccup occurred about 80 miles out, when Tom's clutch cable shook loose. We pulled over to the side of the highway, cracked out the tools, and were up and running in few minutes. Considering that almost every fastener on these bikes has been removed multiple times over the past months, it is amazing that more things did not shake loose during the initial leg.

We pulled into St. Louis late Sunday night after a 400 mile run. A few pictures were attempted with the Arch, and then we collapsed into a hotel room, our bodies not yet accustomed to the seats and extended driving conditions. The next morning we indulged in some custard (not going to find much of that south of the border) and headed into the Ozarks. The hill driving was beautiful. Then into western Missouri, the hills got smaller and the horizons longer. The thermometer topped out at 104 degrees. On a bike you have a perpetual wind which helps keep cold, but our riding gear is laden with Kevlar and is heavy duty for protection. It is hot and the sweat does not stop. We made the smart investement in 3-liter Camelback packs, which have allowed us to drink while driving, keeping dehydration at bay and allowing us to keep driving on longer legs.

Oklahoma greeted us with a slap upside the head in the form of a vicious head wind. When coupled with the turbulence caused by passing semis, sometimes our light bikes get tossed all over the road. One gust was so severe it blew me into the next lane and caused my bike to shimmy so much I thought I had blown a tire and was forced to pull over. Driving in wind like that is exhausting for distances. After 500 miles on our second day, we rolled into Oklahoma City and stayed with one of Tom's co-worker friends. The next morning we left and headed due south. The wind had not abated, which was a nice 'Good Morning!' from the Plains. Nine hours and 475 miles put us into San Antonio, where we holed up with my sister and her husband (Thank You Erin and Ryan!) and put some last pieces on the bikes and made final preparations for leaving the States. There is always one more thing to do. At 3 a.m. this morning, we were out on my sister's lawn using our headlamps and applying waterproofing to our maps. So much to do... I am currently waiting for one last morsel to arrive by UPS, before we load up and head out for Mexico. Our destination there in a few days is Oaxaca, where we will meet some friends and relax for a couple days before heading to Chiapas and Guatemala.

I know this is getting long, but very quickly I would like to answer three of the most common questions I have received about this trip:

1. What types of bikes are you taking? The motorcycles are a 1993 and a 1994 Kawasaki KLR650, both with around 10,000 miles. We specifically bought these bikes last fall for this trip. They are called thumpers: they have only one big cylinder that thumps away at a variety of speeds. These bikes are called dual sport bikes - they are like giant powerful dirt bikes that are capable of maintaining highway speeds but can also go offroad. I'll attach some pictures. The bikes are known for being ugly (check out the color schemes), uncomfortable, and not exceptionally good at highways or offroad. But most importantly, the bikes are known for being tough and dependable: if you take care of them then they will take care of you. They also are easy(ier) to work on. They are not chrome-laden monsters with inaccessible parts. Rather, they have plastic covers that come off easily and allow you to get at their guts. They could break down at any time, just like any bike. But they have taken us almost 1500 miles so far without complaint, so I have a feeling that they will keep chugging for awhile.
As far as holding our gear, we have attached two large steel 20mm ammo cans to the sides of each bike, mounted to a frame we attached. We each have a detachable top box trunk for the rear, and a 35 liter dry bag that sits between us and the trunk. We can hold a lot of stuff.

2. What happens when you break down? Tom and I have put a lot of time and effort into upgrading and learning about these bikes. We did all the work ourselves, with the couple exceptions of two local Milwaukeeans who showed us how to do one difficult procedure and helped remove some stripped bolts. We have spent $0 at mechanics on these things. We have upgraded the brakes, the suspension, the cables, the air filter, the battery, frame bolts, relocated turn signals, installed protective hardware, etc.. We checked and adjusted the engine valves ourselves and removed, disassembled, and cleaned the carburators. We've done other engine work and stuff I can't really think of. We can change tires on the side of the road in a flash. Blah Blah Blah. In short, we've learned a lot about these bikes and are pretty handy with a wrench these days, so hopefully we can take care of most things that pop up. All that being said, there still is a lot that can go wrong that is beyond us...

3. What do you take on a trip like this? I made a nearly comprehensive packing list for my own sanity. I'll attach that here as a word document if you want to look at it.

Okay, sorry that got so long, but that sums up about a year of trip preparation into a few paragraphs. If you have any questions along the way, feel free to ask and I will do my best to answer. I will also try to attach photos whenever possible, but sometimes third world internet access leaves something to be desired. Anyway, hopefully you will hear from me soon from Oaxaca and everything is going smoothly.... 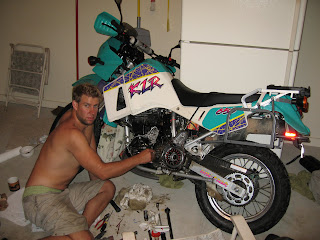 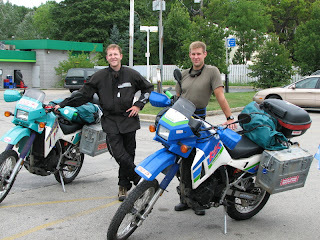 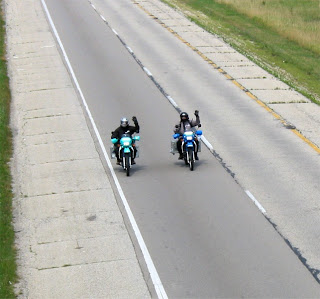